The amounts of pension available from the fund depend in the long run on many factors. For example, the following factors have to be considered:

The Trustees have the responsibility to revise the accrual rate from time to time as necessary in light of the Plan’s experience.

On the basis of assumptions approved by the Trustees, as of the June 2022 valuation, the Fund Actuaries have determined that the assets of the plan, and the present rate of employer contributions, can support pensions at $80.00 / full year of service from January 1, 2023 onward.

In addition, accrual rates for past service timeframes will be increasing by 10% for Active, Deferred vested and Limited members’ past service as of January 1, 2023.  Past service between 2019 and the end of 2022 will increase to the $80.00 accrual rate plus another 10% (to $88.00) for that timeframe. 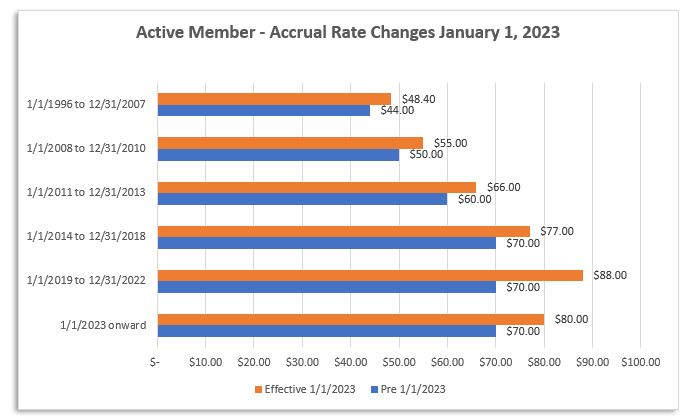 *A full year of service is 1200 hours.  For partial years of pension service, 1/10th of the accrual rate will be credited for each completed 120 hours.

When the Trustees increase the accrual rates, both active and retired members benefit from a form of ad hoc indexing.